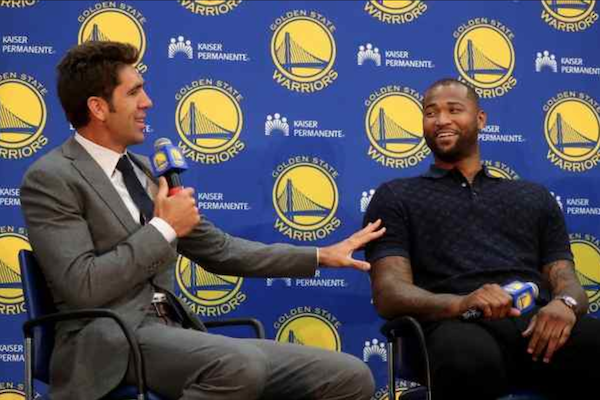 “It was early in the morning — I spoke to his agent. We had been preserving our taxpayer mid-level exception for somebody that might fall through the cracks and not get paid in a very tight free agency market. But mostly we were thinking wings. I figured if something like that were to happen it would happen July 8th, 9th, 10th.

“But we got the call and I just said, ‘Look. We don’t have anything more,’ because we’ve talked about other high-level free agents and the thought from their agent was, ‘Can you do a sign-and-trade? Can you get to a bigger number?’ And I kind of said, ‘Look, our roster is what it is. To move that many pieces around, to create $10 million in room, or $15 (million), it’s just prohibitive, I don’t want to waste your time.’

“So I thought that’s where the conversation was going … and I said to him, ‘We don’t have the money that you’re probably commanding out there.’ And this is the moment it became real — he said, ‘We understand what you have.’ And I said, ‘Well we only have the taxpayer mid-level.’ And then when he said, ‘I know,’ that’s when I knew it was real.

This isn’t talked about enough, but Cousins deserve some kudos for rolling with the Warriors. Yes, they are a means to end for him—a team he knows will still be playing into June, giving him more time to showcase his post-recovery progress. But he has no idea what role he’ll fill or whether he’ll even have the opportunity to close games for them. To jump into this situation, at a stark discount even in a bare-bones market, says a lot about his desire to reverse perception about his play style and closed-door demeanor.

Granted, we’ll know more about his intentions and how he fits with Golden State in the months to come. Maybe things go belly up. For now, though, he deserves some praise.