Anou Enright March 20, 2018 NCAA No Comments on Penny Hardaway Hired to be Next Memphis Head Coach 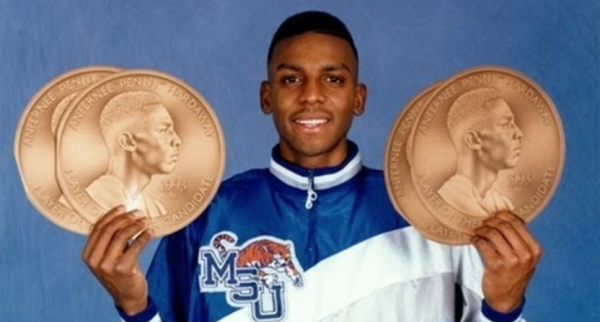 One of the greatest players in Memphis Tigers basketball history is returning to his alma mater.

Penny Hardaway, former 1st-Team All-NBA player and No. 3 pick of the 1993 NBA Draft out of Memphis (it was Memphis State at the time) has agreed to be the university’s next head coach.

This Just In: Former Memphis and NBA star Penny Hardaway has agreed to a deal to become the Tigers head coach, sources told ESPN. https://t.co/TzRpUnsi9z

As previously mentioned, Hardaway starred at the University in the early 90s, averaging 20.8 points, 7.7 assists and 5.9 rebounds in two seasons before become one of the faces of the NBA and a member of an electrifying duo in Orlando with Shaquille O’Neal in the mid-90s.

This is a dream job for the Memphis native, He has lead East High School in Memphis to three straight state championships, but this will be his first college coaching job on any level.

This is a big risk for Memphis taking a chance on Hardaway and his limited experience, but he is a great face for the university and will likely be able to be a successful recruiter off of the bat and hire an experienced staff around him to help him transition and learn the college game.

They are hoping they can return to their prominence of the 2000s and early 2000s as one of the better college basketball programs in the nation.