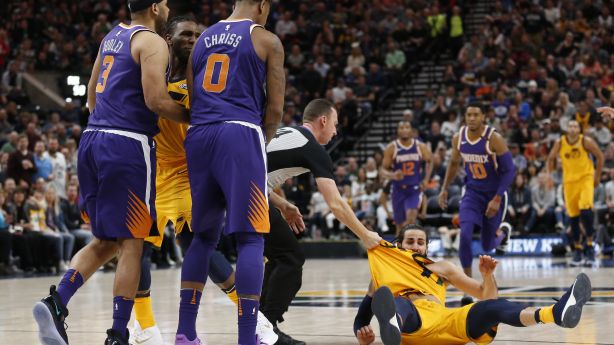 Things went south for the Phoenix Suns season long ago (or have they? Lottery balls..) and they found themselves in a similar position on Thursday night in Utah being down big late in the game.

After Chriss badly missed a dunk attempt and went to the ground Rubio quickly stepped over him to inbound the ball and head down the court the other way, Suns veteran Jared Dudley decided to check Rubio as he was coming down the court and Chriss followed by essentially hit sticking him (Madden reference)…

Dudley, usually a calming and jolly presence on and off the court, explained the situation in his view after the fact on Twitter…

Thought Quese got fouled, Ref gave them the ball while he was on the ground with my other teammate trying to help him up.. I wanted to stop the fast break( I always do this) The push was a little much but he flopped and sold it.. Flagrant 1 or 2 and you move on.. https://t.co/Yf6CYlcaFj

Dudley and Chriss were ejected and Donovan Mitchell and Joe Ingles received technical fouls in the skirmish.

I think another season of futility boiled over a little bit Thursday night for the Suns and Rubio became their de-facto shoving bag to let out their anger.

Suns GM: Chriss’ Consistency for Remainder of Season “Could Determine What They Do or Don’t Do At His Position”