admin February 28, 2018 NCAA No Comments on Carmelo Anthony Would ‘Love’ to Sit Down with NCAA to Talk About Paying Student Athletes 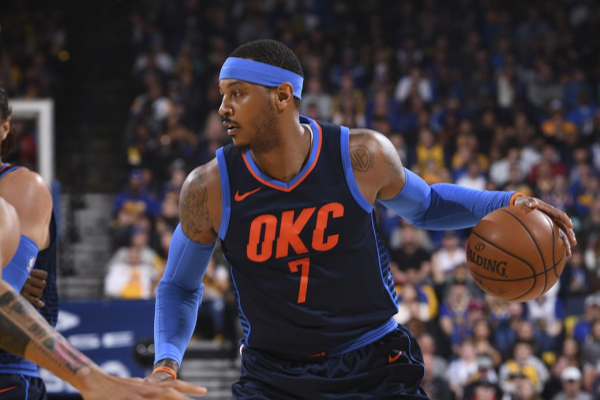 Add Carmelo Anthony to the growing list of NBA players and personalities who support NCAA student-athletes getting paid for their services.

On top of that, you can also count him in for a sit-down with the NCAA itself. He would love the chance to talk with its figureheads about compensating players beyond their scholarships, per USA Today‘s Andre Joseph:

“I think it has to be a collective effort between NCAA, NBA – just basketball as a whole. NCAA and amateur sports have been corrupt for so long. We all know that. Whether you get caught doing it or not, it is what it is. But that’s beside the point. I think college basketball players – college athletes, period – should be compensated. You have to think about a 16-year-old kid, 17-year-old kid going to college. Yeah, they get a free education if they get a scholarship. But how are they surviving on those campuses? A lot of them can’t afford food. They’re getting in trouble for taking $10 or $20. A friend or a family member can’t give them money. It’s so many smalls things that go along with that. I just wish and hope and pray that something happens.

“I would love to sit down with the NCAA just to hear – no, I’m serious. Just hear about their thought process behind this and what they’re thinking. What’s the future? I’m all for the athletes. I think we need to figure something out for college as a whole.”

Personally speaking, sign me up for this. Anthony spent a year in the NCAA’s pipeline. He has experience dealing with their rules and regulations. Give him a voice at some sort of official mediation or bargaining table.

Really, though, any sort of dialogue needs to take place. It has needed to take place for quite some time, but the urgency for talks have increased tenfold in the wake of the wiretap reporting that identified student-athletes, agents and teams that skirted around the NCAA’s policies.

In a vacuum, players should be compensated for their services. That shouldn’t be up for debate anymore. But the method of compensation is a different story. Can it really come from the school? What does that mean for student-athletes of sports that don’t generate revenue? Is allowing players to capitalize on their own likeness a viable solution? Should they be allowed to accept sponsorships and endorsements in exchange for attending certain universities and/or signing with specific agencies?

There is no perfect solution. That doesn’t mean the status quo is okay. It’s not. The current model exploits marquee collegiate athletes more than it protects them. Something, anything, needs to be done.