admin October 18, 2017 Blogs No Comments on Carmelo Anthony’s Son Wanted Him to Play for Oklahoma City…Before Knicks Even Traded Him to Thunder 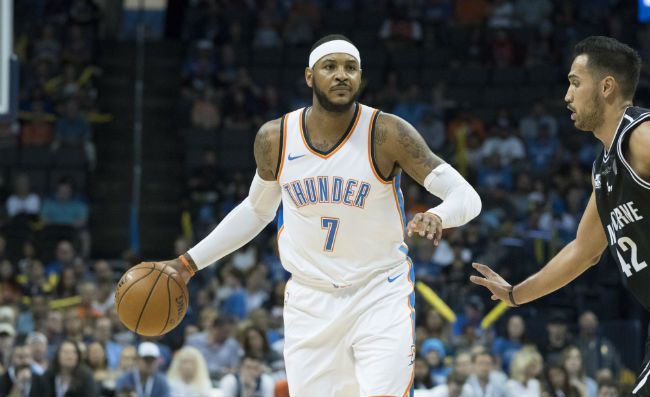 The Oklahoma City Thunder have someone very special to thank for Carmelo Anthony agreeing to accept a trade from the New York Knicks.

Nope, it’s not Russell Westbrook. Nor is it Paul George. It’s not assistant general manager Troy Weaver, who helped facilitate Anthony’s arrival to Syracuse, either.

In an interview with The New York Times this week, during a break from preparations for his Thunder debut, Anthony revealed that he needed one more nudge before telling the Knicks last month that, yes, he was prepared to be traded to Oklahoma City.

Anthony proudly told that story on Tuesday afternoon after practice, lounging on a comfortable courtside bench while watching his son, Kiyan Carmelo Anthony, who is 10, work on his one-on-one moves against some Thunder staffers and, for a few minutes, Westbrook himself.

Props to Kiyan for getting through to his Dad. Anthony is on record as downplaying the significance of his no-trade clause, but his desire to play for the Houston Rockets and, to a lesser extent, the Cleveland Cavaliers is the worst kept secret in the NBA. Only later in the summer, when he was facing the prospect of entering training camp with the Knicks, did he widen his scope ever so slightly, to include the Thunder.

Oklahoma City probably doesn’t even make the cut if not for the Paul George trade. Maybe Anthony’s son is able to convince him to join forces with Westbrook anyway, but the prospect of teaming up with two stars makes a bigger impression than the opportunity to join up one. Like, in this case, Anthony shouldn’t have even needed Kiyan to give him the green light or stamp of approval. It was that much of a no-brainer.

Still, seriously, all the ups ever to Kiyan for recognizing a destination with potential before his Dad apparently did. The kid might have a future as a general manager—or at the very least as a Senior Special Advisor on Life Decisions to Melo.