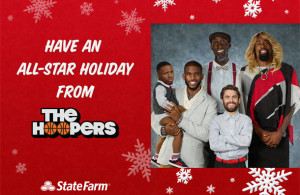 Yesterday State Farm launched “The Hoopers,” a new campaign that will run throughout the 2015-16 NBA season. The campaign brings together an array of notable NBA stars, including Chris Paul, DeAndre Jordan, Kevin Love, Kevin Garnett, and Damian Lillard in a :60 commercial spot that debuted yesterday during the New Orleans Pelicans vs. Miami Heat game at noon, Christmas Day on ESPN. “The Hoopers” casts the five players as a typical family—complete with Dad, Mom, teenage Son, Grampa, and Baby—bringing to life the many ways the fictional Hoopers family receives assistance from their neighbor, a State Farm agent.

“The Hoopers” is a follow-up to the wildly popular State Farm “Born to Assist” NBA campaign, which for three seasons communicated the value of an assist, both on and off the court, through the story of Chris Paul and his long-lost twin, State Farm Agent Cliff Paul. The new campaign’s inaugural spot, entitled “Meet The Hoopers,” is a pitch-perfect send up of the aesthetics and tropes of the family sitcom genre. Additional spots in the campaign take the idea even further, touching on everything from Mom’s fear of home invasion (“Robbed”) to a “very special episode” with Dad and Son discussing the birds and the bees (or, as this all-star family puts it, the “Hawks and Hornets”). Both videos are below if you missed them during yesterday’s Christmas Day games….