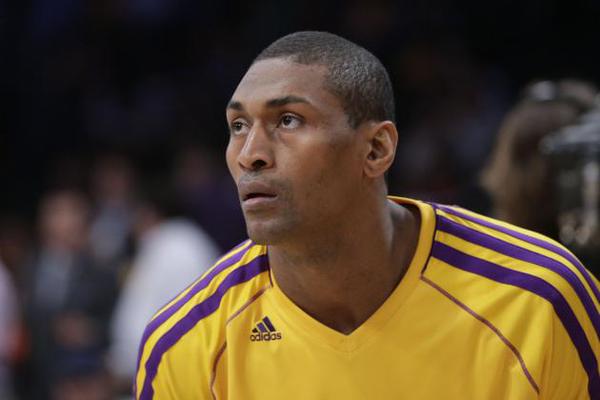 The 35-year-old hasn’t played in the NBA since 2013-14, and though he’s interested in returning to the Association, potentially with the Los Angeles Lakers, the odds are against him making any sort of substantive impact for any kind of team—unless, of course, you ask him; because if you ask him, he’ll tell you he’s still one of the best small forwards alive.

USA Today reported that Lakers general manager Mitch Kupchak is contemplating whether to bring him back.

But World Peace told the Daily News that he and Kupchak haven’t talked about his return yet.

“Me and Mitch have a cool relationship but we have not talked about me coming back to the Lakers,” World Peace told the News. “I call Mitch about other things. We just have a good relationship. Whether I come to the Lakers or not, me and Mitch would still be cool.”

n the meantime, World Peace, who played in Italy and China the past two seasons and last played for the Knicks in the NBA, continues to work out at the Lakers practice facility, thinking about his future. He declined to name other possible teams he may play for.

Let’s be clear about something: During his prime, World Peace was, specifically from a defensive standpoint, one of the best small forwards. But, with his 36th birthday (November 13) right around the corner, and with more than two years separating him from meaningful contributions at the NBA level, he’s not anymore.

Truth told, World Peace isn’t even a small forward in today’s NBA. At 6’6″, he probably should be, or maybe he should even be a shooting guard. But he’s not going to be particularly explosive or quick at this point, and his physical, bruising brand of defense plucked straight from the late 1990s renders him more of a Draymond Green-type, in the sense that, while undersized, he should be guarding power forwards and centers.

And maybe that’s where he can help the Lakers or another team. The Lakers specifically are set at power forward, but MWP can see time as a quasi 4 and 5, occasionally stretching the floor with his ability to drain three-pointers at almost-average rates, while mostly just providing the defensive impetus alongside Roy Hibbert or when the Lakers’ new center is on the bench.

As for World Peace being one of the best small forwards on the planet, or even being a small forward at all, those days are over.