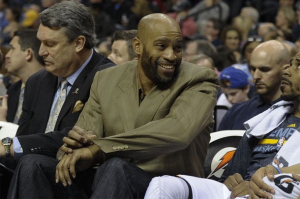 At 38-years old, Vince Carter is the fourth oldest player in the NBA. Hard to believe. Despite that, he has managed to stay relevant and perform at a very respectable level. But it has to come to an end at some point and Carter seems ok with that as he’s contemplating his next move post-retirement.

When he was injured this season, Carter made several appearances on the Grizzlies’ television broadcasts as a guest analyst. As usual, he was anticipating the next phase of his life, once his playing career concludes. He would like to work in television, he said, even though he has not ruled out coaching. If only he could find a way to do both. […] “Maybe I could come into practice and the coach would let me help out,” he said.