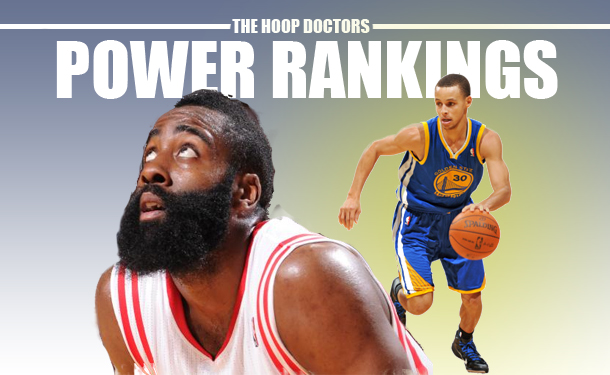 It’s almost time for us to say goodbye to another year of NBA Power Rankings.

The NBA’s regular season is winding down, which means we’re nearing a point of farewell. Never fear, though, because that point isn’t here just yet. We still have the playoff race and, equally important, the MVP chase—or, as it’s now become, the vessel through which Stephen Curry and James Harden are proving to be superhuman.

Not that the various playoff pursuits aren’t important. Only the Hawks, Cavaliers and Warriors are wholly locked into their positions. A bunch of teams have already clinched postseason berths, but most of the seeds are still up for grabs. Harden has the Rockets making a push to overthrow the Grizzlies; the Spurs are rounding into NBA Finals form; the Pelicans and Thunder are scrapping and clawing like hell; and the Heat, Nets, Celtics, Pacers and Hornets are all still trying to keep their playoff hopes alive.

Yes, it’s a busy time in the NBA world. So let’s take a moment or five to reflect on the madness that’s unfolding.

To the power rankings hard-top convertible!