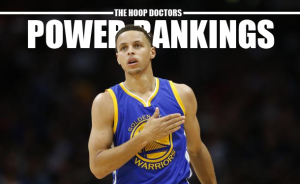 Pat yourself on the back. Do the self-five. Pound your chest. Hell, play some pocket billiards if you’re into that sort of thing. You deserve it.

And you made it.

Now it’s off to the playoffs, which begin Saturday. And thank heavens for the brief respite in between Game 82 and the postseason’s onset. The league’s playoff picture was sheathed in butter-thick smog until the bitter end. Almost nothing was for certain until the season was over. It was equal parts brutal and freaking awesome.

Ahead of your reward for enduring such madness, we power rank for the last time this season. Fear not, we’ll be back. Maybe. If you ask nicely.

As always, remember that playoff seeds aren’t weighted here. There is a heavy recency bias, but we also take into account a team’s entire body of work. Records are basically, but not quite, discarded in the trash. We care only about ranking the NBA’s best teams, as of right now, from top to bottom.

For one last time.

To the power rankings Boeing 777!