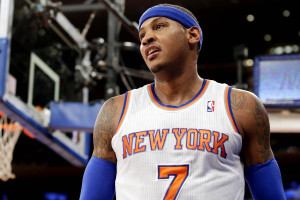 No, he isn’t playing. He’s still injured. And no, he isn’t on the sidelines cheering for his teammates. There isn’t much to cheer for these days. Plus, you know, he’s afraid of suffering another injury while watching court side.

The kind of work he’s doing is happening behind the scenes, off to the shadows, inside Phil Jackson’s House of Zen (his office). It’s the kind of work that won’t make a difference until July, when the Knicks are pitching free agents on a future in New York.

GM Steve Mills said on Thursday night that Anthony has been talking to the front office recently about players he’d like to see the Knicks pursue in free agency.

“He is very much a part of the process of trying to understand what we’re looking for, how we’re going about it,” Mills said in a discussion with season-ticket holders at Madison Square Garden.

Mills said that Anthony had been spending hours in his office going through rosters and talking about players the Knicks may pursue during his rehabilitation from knee surgery.

Paint me curious. I’d love to know which free agents Melo is actually picking out. The Knicks will have enough cap space to pursue anyone of their choosing, so it makes you wonder what Anthony’s approach might be.

Is he simply checking off the biggest names, telling the Knicks to sit down with Marc Gasol, LaMarcus Aldridge, Kevin Love and Rajon Rondo?

Is he tailoring his list to the Knicks’ half-baked triangle offense, citing guys like Wesley Matthews and Paul Millsap who can function within a system that demands off-ball movement and passing?

Is he perhaps looking specifically for on-court buddies who complement his skill set?

Or is he making this a true project, analyzing every nook and cranny, taking into account even the smallest details, maybe even avoiding Gasol and Aldridge altogether because he knows the Knicks will likely end up drafting a big man?

Everything and everyone is in play at this point, though the latter thought is especially intriguing. The Knicks’ free-agent pursuits will be directly impacted by their draft. If they end up drafting Jahlil Okafor, there’s little need to sit down with Gasol or DeAndre Jordan, unless they’re trying to trade the Duke prospect. If they select Karl-Anthony Towns, the same might hold true. Or they may strictly view him as a power forward, someone who can coexist with not only Melo, but with a center like Gasol.

Regardless of Melo’s wish list, the Knicks have their work cut out for them. They need to sell players in their prime who could sign with better teams in more tax-friendly markets on joining their extensive rebuilding project.

With the threat of refusal looming large, the Knicks need all the contingency plans ever.