Hornets’ Al Jefferson Staying, Unlikely To Opt Out Of Contract 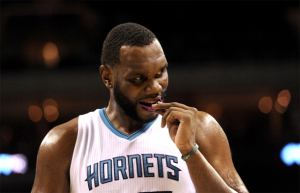 Even before the 2014-15 season began, the Charlotte Hornets were looking to keep their momentum from the previous season and make it two-straight playoff appearances for the franchise. And despite being eliminated by the Heat in the opening round—it was clear that resurgence of center Al Jefferson, and the development of their star point guard, Kemba Walker, have proven to be a duo strong enough to lead the team into the postseason.

But once again this season, things didn’t go the way they hoped as we won’t be seeing the Hornets participate in this year’s playoffs.

‘Disappointing’, would be the best word to describe the team’s performance this season and surely, the players and management are feeling the same way. Especially the Hornets’ main man in the middle—Jefferson, who averaged his fewest rebounds per game since 2006. Simply put, he wasn’t as dominant as he was when he led the Hornets to the playoffs just a season ago.

Now with a long summer ahead for the Hornets, one of the main issues that they have to deal with would be keeping Jefferson for at least another season, as he has the option now to opt out early from his current contract.

Fortunately for the Bobcats, Jefferson stated during his exit interview that he has no plans in opting out of his contract with the team for next season.

Via Rick Bonnell of The Charlotte Observer:

“I’ve got unfinished business here. That’s not even an option for me." Al Jefferson when asked if he'd opt-out of next season to be a FA.

On Jefferson’s final year, he will be earning more than $13.5 million guaranteed on his current contract, so it would be quite foolish for him to opt out given his sub-par performance this season. However, the 11-year center is adamant about redeeming himself from his lack lustre performance this season, as he finished with averages of 16.6 points and 8.4 rebounds per contest, which is well below his usual average.

That said, its still safe to say the Hornets will be one of the more active teams in pursuing key free agents in the offseason.