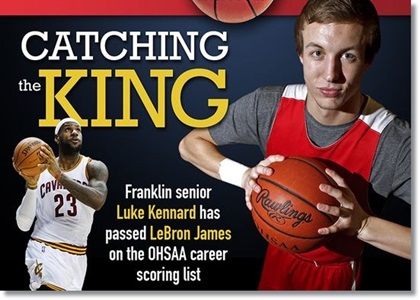 Four time NBA MVP Lebron James will forever be known as the best high school player to come out of Ohio, but he is getting some competition when it comes to all time prep scorers in the Buckeye state.

5 star University of Duke commit Luke Kennard’s legend as a prolific scorer continues to grow as he dropped 44 points in a game recently, to pass the great Lebron James in career points scored in the state of Ohio.

By connecting on a three in the 3rd quarter against Ohio rival Brookville on Friday, Kennard passed Lebron for 4th place all time in Ohio points scored, tallying a staggering 2,652 career points.

The top scorer in Ohio high school history is former University of Ohio State star Jon Diebler, who amassed an incredible 3,208 points from ’03 to ’07.

Kennard was recently rewarded for his outstanding play by being named to the 2015 McDonald’s All American Team, and is the reigning Mr Basketball in Ohio, averaging an eye-popping 38.8 ppg on the season.

And oh-by-the way, Kennard has another connection to Lebron as he play’s for James’ AAU team in the offseason.