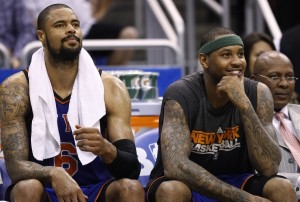 Because of the Knicks surprisingly slow start, many players are expressing pity towards Melo. A few weeks ago, LeBron James said he felt sorry for Melo and last night, former teammate Tyson Chandler said the same thing when he was sneakily asked that question by the media. I’m sure Melo isn’t looking for pity from anyone.

Chandler’s response when asked if he feels sorry for Anthony…

“I do because he’s a competitor,” said Chandler, who received a warm ovation from the crowd in his return to Madison Square Garden and had eight points and 14 rebounds in the win. “I laced them up and went to battle with him for the last three years and know what kind of competitor he is. […] I know he wants to win, and I know he’s going to take a lot of this heat. And it’s unfortunate because he’s a hell of a player in our league. It’s just unfortunate.”

“He signed a contract to come back here with expectations of doing everything in his power to take this team to the next level,” Chandler said. “I ultimately feel like it will with the right pieces. They have to get luck with some things in free agency or get a high draft pick or whatever the case may be, but it takes a while to change the culture. […] You bring in a new coach and you bring in a new offense and a new identity. As long as players and everybody here understands that it’s a process, it’ll be all right. The moment it gets tough is when you’re losing. Losing makes things difficult.”