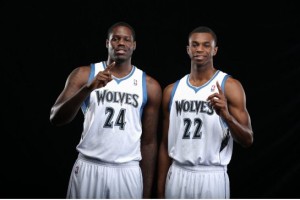 Some may have expected the Timberwolves ticket sales to suffer upon hearing the news of Kevin Love’s departure. And they did decline over the previous year while they were waiting on the official news of who Love was traded for. However once it was officially announced the Wolves would be getting the high flying #1 draft pick Andrew Wiggins, ticket sales took off in a big way. The first week after the announcement Minnesota set a team one week record for season’s ticket packages sold….

After completing the long-rumored trade that sent Love to the Cavaliers and brought Andrew Wiggins, Anthony Bennett and Thaddeus Young to Minnesota, the Timberwolves have sold more than 300 full season-ticket packages in the last week.

That beats the previous record in 2011 that was set when Ricky Rubio announced that he was coming over from Spain to play for the team.(source)

Looks like Wiggins will be good for the organization one way or the other, even before he ever steps foot on the court in Minny.