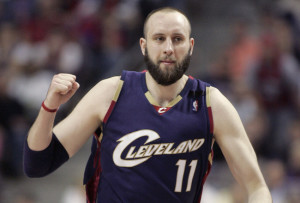 During LeBron’s first stint with the Cavs, management failed at getting any other marquee players to join him. That, of course, is primarily why he left. But all of a sudden, guys are breaking their necks to get to Cleveland. Just look at the number of guys who are turning down more money, or forcing a trade to get to Ohio.

But is Big Z interested in joining the Cavs too? Ilgauskus, 39, has been retired for 3 years and even had his jersey retired by the team this past season. According to reports, he’s attempting a comeback. Naturally, this wouldn’t be the case if LeBron were still in Miami.

.@TheRealTRizzo: Zydrunas Ilgauskas is attempting a comeback to the NBA. #Cavs Listen to The Really Big Show on http://t.co/l1VfrW2yk5