admin April 27, 2014 Allen Moll No Comments on Would The 76ers Consider Trading Carter-Williams For Another Lottery Pick? 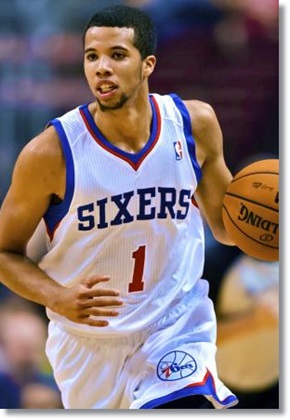 It’s not official yet, but Philadelphia 76ers first year sensation Michael Carter-Williams is a lock to win the 2014 NBA Rookie of the Year.

Beginning with his impressive NBA debut against the reigning 2 time NBA Champion Miami Heat, where MCW had a near quadruple double including a rookie record 9 steals, the former Syracuse standout won Eastern Conference Rookie of the Month honors in 4 of 6 months during the regular season, tallying 3 triple-doubles, en route to leading all rookies in scoring(16.7 ppg), assists(6.3), rebounds(6.2), and steals(1.9).

It would appear as if, despite Philly winning only 19 games during the regular season, that they finally may have at least one superstar to build on heading forward, or do they?

MCW has been touted by Magic Johnson as a future NBA superstar talent and should become the 76ers’ first ROY winner since Allen Iverson nearly 20 years ago, putting into perspective just how select of company Carter-Williams will enter.

It truly is a matter of perspective when it comes to MCW’s future prospects as some experts have touted him as the next Penny Hardaway while others have pointed to his eye popping numbers as a bi-product of playing on such a horrendous squad devoid of any other NBA talent.

It’s no secret that the 76ers are in the midst of a full on rebuild, as they currently possess 2 top 10 picks in the upcoming 2014 NBA Draft but no one is sure of what new GM Sam Hinkie is thinking long term when it comes to formulating a winning program.

In a local Philly newspaper, a recent report went public wondering aloud if Hinkie would consider trading Carter-Williams prior to the draft in an attempt to secure another Top 10 pick in the talent laden 2014 Draft.

It sounds preposterous right?  But remember, just prior to the 2013 Draft, Philadelphia did the unthinkable, sending budding All Star point guard Jrue Holiday to the Pelicans for Nerlens Noel and their 1st Round pick in this season’s draft.

What if the Sixers could somehow nab Wiggins, Parker, and Randle, or some combination of Embid, Parker and Aaron Gordon in the June 2014 Draft?

It’s some out of the box thinking, but Philly needs to get the most out of this year’s draft, by any means necessary…

Would you trade MCW for another 1st Round pick?