admin April 20, 2014 Allen Moll No Comments on Melo is 1st Since Shaq To Average 27 Points and 8 Rebounds In a Season 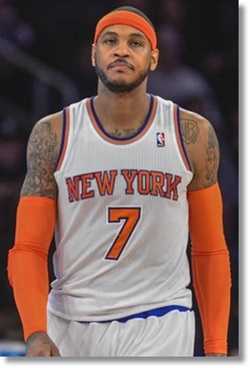 Although he is one of the NBA’s most gifted scorers and popular players with fans, Carmelo Anthony surely has his share of critics that love to say he’s a ball hog and shoots too much for the New York Knicks to ever be title contenders.

Those sentiments surely will come into play this summer as Anthony could opt out of the final year of his contract and test the free agent waters.

Instead of going public to combat his critics, Melo has had arguably two of the best individual seasons of his career with the Knicks, letting his actions speak louder than words, winning the 2013 NBA Scoring Title and finishing 2nd only to Kevin Durant this 2014 season.

There’s no getting around the fact that this year’s Knicks squad was one of the most disappointing teams in the Association, missing the 2014 NBA Playoffs following a 50 win season last year, but all of the blame should not be heaped upon Anthony as he became the first player since Shaquille O’Neal back in ’02-’03 to average 27+ points and grab 8 or more rebounds in a season.

That stat was a little surprising since Melo isn’t really known for his rebounding but he did set a career high in ’13-’14, pulling down 8.1 rebounds per game.

I also would have thought that other prolific rebounders like Kevin Love or Tim Duncan would have accomplished this feat but Duncan never averaged 27 points for a season and Love just missed this year, dropping 26.1 ppg for the Timberwolves in 2014.

Some team, whether it be New York or another potential free agent destination, will have a tough choice to make in pursuit of Anthony this offseason as Melo will turn 30 prior to the start of next season but they will undoubtedly be getting an elite player that scores as easily as any player outside of Kevin Durant.

At 30 years of age, should the Knicks break the bank to offer Melo a max deal worth around $130 million, to keep him in New York for the remainder of his career?