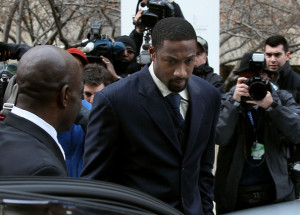 Gilbert Arenas had a colorful but troubled career in the NBA. Well the fun hasn’t stopped off the court, as Arenas once again landed himself in hot water with the police this week. This time for an incident that most wouldn’t be too upset about however.

According to Orlando Police, they received a call of an altercation at a restaurant. Arenas was in the area for a signing at a gun show. By the time the police had arrived the restaurant management had escorted Arenas out. He was still upset when the police arrived and even resisted arrest.

Restaurant employee, Erica Goldsmith, reported that Arenas had approached Zimmerman as he was eating lunch and began a verbal confrontation which ended with threats of physical violence.

“Zimmerman was at a table near the back of the restaurant when I saw a large black guy approach him,” said Goldsmith. “That’s when I thought, ‘a tall, black guy sneaking up on Zimmerman? This isn’t going to end well.’”

Arenas was questioned by officers at the scene and, eventually, taken in to custody after he showed aggressive behavior and resisted arrest.

Since his acquittal in July of last year George Zimmerman has seemed to continuously have brushes with the law, each time escaping any legal prosecution.

Arenas’ NBA career went south after his locker room gun incident when playing for for the Washington Wizards. The first question I have is why has he not learned his lesson. He’s attending gun shows?

That said, I have a hard time believing George Zimmerman couldn’t have handled this situation better. And lets hope to god Zimmerman wasn’t attending the same Gun Show. Guess he will never learn either?