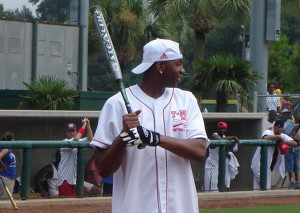 Tracy McGrady hasn’t been retired all that long but he’s apparently getting bored already. He has done a bunch of analyst work but maybe that isnt’ enough for him. Is baseball next?

According to Jeff Van Gundy, this may be the case. T-Mac should give it a shot just for pure amusement of it.

“I think he’s going to play independent league baseball as a pitcher this year,” Van Gundy said. “I’m being serious. I’ve heard from sources in Houston — seriously — that he’s throwing over 90 miles per hour.”