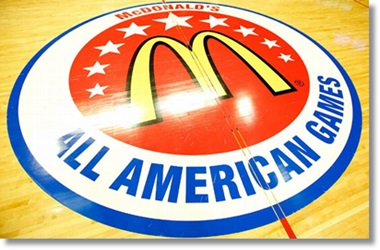 Since 1978, more than 1,150 players have competed in the McDonald’s All American Games, forming an elite list of some of the top names in basketball history including, Michael Jordan, Kobe Bryant, Carmelo Anthony, LeBron James, LaMarcus Aldridge, Kevin Durant, and Kevin Love.

This past week, the committee announced the final and complete rosters for this year’s game to be held once again at the United Center in Chicago, Illinois. on April 2nd, 2013 and will be televised live on ESPNU.

This year’s teams were selected from the field of more than 1,000 Nominees by the McDonald’s All American Games Selection Committee, led by committee chairman, Morgan Wootten, legendary Hall of Fame basketball coach.

Highlighting the field will be the nation’s top big men, Chicago natives Jahlil Okafor(Duke) on the East, going head-to-head against Cliff Alexander(Kansas) playing for the West.

Of the 24 boys selected to the team, Kentucky and Duke have the most commitments, each with four.  Other players to watch out for include Tyler Ulis and Karl Towns Jr, both headed to Kentucky, the nation’s top ranked PG Emmanuel Mudiay, headed to SMU, and Arizona bound wing Stanley Johnson, and potentially the next Duke sharpshooter Grayson Allen.

Check out the entire 2014 McDonald’s All American Game Rosters………