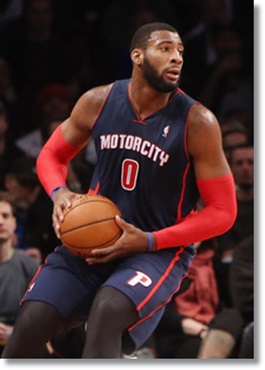 Second year Pistons big man Andre Drummond just might have a great future ahead of him, especially if he keeps developing at his current rate.

He showed us glimpses of his immense talent last season, pairing with Greg Monroe to form one of the most potent and up-and-coming frontcourts in the Association.

Early season success has been hard to come by for the upstart Pistons as offseason free agent acquisitions Brandon Jennings and Josh Smith are still learning the ins and outs of new coach Mo Cheeks’ offense.

There are so very few players of his size and girth, packaged with some amazing athleticism around the league, it has prompted some to say he’s the modern day version of future Hall of Famer Shaquille O’Neal.

Over the weekend, Drummond did put up a Shaq-like stat line in a win over the Sixers, setting career highs in points(31), rebounds(19), and steals(6).

In fact, he fell 1 rebound short of being the first Piston to notch a 30-20 game since Dennis Rodman and became the first player since Hakeem Olajuwon back in 1990 to notch a 30-19 game with 6 steals.

Of course, Drummond does have one other similar trait as Shaq, atrocious free throw shooting, as he entered Sunday’s game against Philly shooting a paltry 27% from the line.  Can you say “Hack-A-Drummond?”

Check out some highlights from Andre Drummond’s career game……