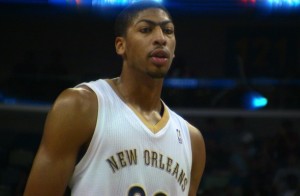 Anthony Davis has been off to a solid start so far this season for the young Pelicans. But unfortunately, a bit of bad luck has come his way. Davis has suffered a broken hand (left, non-shooting hand) and is out indefinitely.

Get this: he actually broke it on the rim while attempting a dunk. I hate when that happens. New Orleans will miss his 19 and 10.

Davis suffered a non-displaced fracture in his left, non-shooting, hand in the first quarter of the Pelicans game against the New York Knicks and wasn’t able to return. The team didn’t provide a timetable for his return.

Davis said he injured his hand when he slammed it on the rim during an alley-oop attempt.

“I am hoping it is a short-term thing, so I can get back on the floor,” Davis said. “I felt pain. I didn’t think it was going to keep me out. I am happy that my team battled for the whole 48 (minutes) and got that W.”