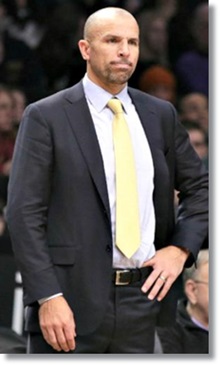 During his playing days, Jason Kidd was known as one of the most savviest ballers on the planet, every bit as cerebral as well as deft ball handler and pinpoint passer.

But the Brooklyn Nets have stumbled out of the gate, losing 10 of their first 14 games mainly due to injuries to Deron Williams and Brook Lopez, heading into Wednesday’s tilt with the LA Lakers.

The early season sluggish start has prompted many to begin to question if Jason Kidd was the right man for the job, considering he has had no prior coaching experience.

He has had some tension with Kevin Garnett over an imposed minutes restriction, benched his entire starting line-up during stretches of games, and was not invited to several players only meetings through the first month of the season.

But during the game against the Kobe-less Lakers, the Nets predictably found themselves playing from behind for a majority of the game, with Lakers sharpshooter and noted excellent FT shooter Jodie Meeks at the stripe with under 20 seconds to play.

After the free throw, the Nets were down 2 with no time outs remaining, when Jason Kidd could clearly be seen mouthing to Nets guard Tyshawn Taylor to “Hit Me”, after which Kidd accidentally/on purpose spilled a drink onto the court, giving the old savvy veteran a chance to draw up a final play during the clean-up.

The play was brilliant, giving Paul Pierce a clear look at a game tying shot, but “The Truth” rimmed it out as the Nets fell to a disappointing 4-11…..