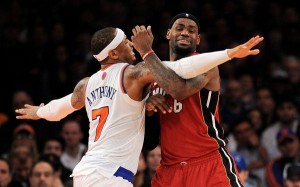 A few years ago, even though LeBron James was pretty much universally hated for leaving Cleveland for Miami, he still had the NBA’s best-selling jersey. In fact, he had that distinction for his first two years in Miami.

He has finally been unseated, by Carmelo Anthony. I must say, this is quite surprising. Of all guys to surpass James, Carmelo doesn’t exactly leap to the front of my mind. But that goes to show you how playing in a major market can help a guy’s appeal. Because he never would’ve been able to achieve that in Denver.

Here are the top 15 selling jerseys, according to nba.com: