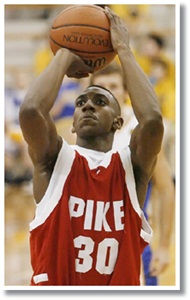 Whether your a fan of Kentucky coach John Calipari or not, true hoop fans must acknowledge that the man knows what he’s doing when it comes to both recruiting and developing NBA ready point guards. For the 5th straight season, Coach Cal has secured the services of the top ranked floor general coming out of high school. Following in the footsteps of Derrick Rose, Tyreke Evans, John Wall, and Brandon Knight before him will be this year’s standout lead guard Marquis Teague.

If the last name sounds familiar, it should since his older brother Jeff is finally getting his chance to shine on the NBA hardwood with the Atlanta Hawks this year, after being one of the top players in college basketball a few seasons ago at Wake Forest. While the younger Teague, standing at 6‘2 and 180lbs won’t overpower you with overwhelming size, he’s a power-pack, highlight reel type player, more in the mold of Rose and Wall than that of the departing Knight just this past season.

Many rate him as the most dangerous open court player in the HS senior class. He’s outstanding off the dribble, although he still favors going left, and with some added strength over the past few months has proven to be an elite level finisher at the rim. He has tremendous ball quickness and is almost impossible to stop in transition or one-on-one getting into the paint or to the rim at will. He is first step as if he is shot out of a cannon and he seems to live at the free-throw line as he is strong enough to seek and absorb contact and still finish. 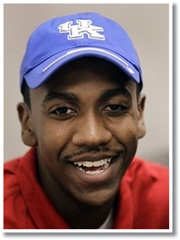 Marquis has tremendous athleticism and with his lateral quickness he also has the potential to be a shutdown defender. Possessing a 6‘7 inch wingspan definitely helps overcome defending bigger floor generals. Back in April of 2010, Calipari bested longtime coaching rival Rick Pitino at Louisville in getting a commitment from Teague.

Similar to Wall, Teague is still considered a raw talent with his potential still ungoverned. He must improve his 3 point shooting to prevent defenses honest on the perimeter. He also seemed to struggle against zone defenses, sometimes forcing shots and committing ill timed turnovers, and has shown a penchant for being too aggressive going to the rim, drawing too many charges.

Even with those areas of improvement, which were all mentioned as negatives for Wall as well, Teague is tailor made for Kentucky’s dribble-drive offense. He finished his senior year at Pike HS in Indianapolis as the #1 ranked PG, and #7 ranked overall prospect in the 2011 HS Class behind averages of 22.7 ppg, 5.9 apg and 4.2 rpg.

After playing well against other top tiered recruits in the McDonalds All American Game, Jordan Brand Classic, and for Team USA in the Nike Hoop Summit, don’t be surprised if Marquis is the next in line as a Lottery bound point guard in the 2012 NBA Draft.

Check out his senior season mixtape: