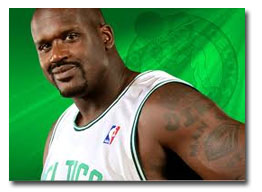 Shaquille O’Neal has been one of the most difficult players to officiate his entire career due to his sheer size and power. He is so much bigger than anyone else on the court they seemingly bounce off him making it hard for refs to determine who is being fouled, Shaq or his opposition. Although not to the same extent, Dwight Howard has also had to deal with much of the same inconsistent treatment from NBA officials.

But after Shaq and the Celtics lost to Howard and the Magic this week, Shaq had some pointed things to say about the officiating…

Shaquille O’Neal has been fined $35,000 by the NBA for his public comments about the officiating.

O’Neal criticized the referees following the Boston Celtics’ 86-78 loss at Orlando on Christmas. He was angry after picking up his sixth foul when Magic center Dwight Howard fell to the ground as they were wrestling for position.

O’Neal said: “I just wonder why I’ve never gotten that call in 20 years. Don’t pick and choose when you’re going to make the call. … That’s what happens when you’ve got control freaks.”

The NBA announced the fine on Monday.