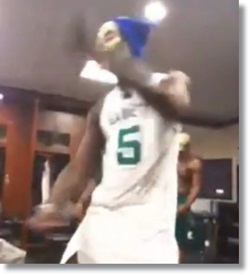 For all of those out there wondering how the Boston Celtics’ team chemistry will be affected with so many new personalities like Shaq, Jermaine O’Neal, and Delonte West on board for this season, I’ve found a clip which should put everyone’s doubts to rest.

Serious personalities like Kevin Garnett, Paul Pierce, and Ray Allen seem like an oil and vinegar mix when compared to notoriously free spirited players like Nate Robinson, Shaquille O’Neal, and Glenn “Big Baby” Davis. Now they are all on the same team and many questioned if lil Nate and Shaq’s fun-loving demeanors would cramp the others styles, but it appears to have taken the opposite effect, as Pierce, and now even Garnett can be seen in number of the team‘s seemingly endless “pranking” videos this off-season.

Recently, it seems that “Krypto-Nate” is reliving his youth by pulling a number of pranks on his Celtic teammates, most noticably Shaq, as he has pelted a sleeping O’Neal with popcorn on movie night, served him salt water to drink, and even shut down practice by running suicides in the big man’s giant shoes.

Now comes the video in question which features Nate, KG, Shaq, and Big Baby doing their own version of Rick Ross’s “Go Hard” in masks and Halloween costumes(it is October, isn’t it?), with Paul Pierce behind the camera. Watch as the straight-laced Ray Allen makes a cameo at the end of the video standing in the corner and keeping his distance. I will warn you that the video includes Shaq shaking his booty, KG in a towel, and Big Baby showing off his man boobs.