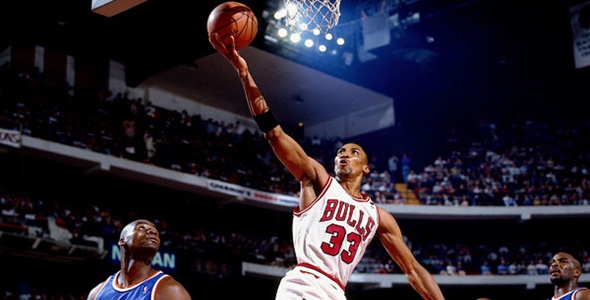 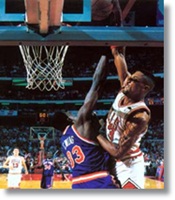 While most fans remember “Pip” for his amazing all around game, one skill that went under the radar and was a truly underrated aspect to his game was his thunderous dunking ability. Maybe it was because he played alongside perhaps the greatest high flyer to ever play the game(MJ), or just that Scottie was a tad taller and longer than Jordan, making his dunks appear less spectacular than that of “Air Jordan.” But if you were an opposing player during the 90‘s and early 00‘s, many would just clear the lane on a Scottie Pippen drive to the basket, in fear of being jammed on or being victimized on his latest poster dunk.

Thanks to some amazingly long arms, Scottie was known for his scintillating one-handed jams, most of which, of the in your face variety. Probably his most famous facial came at the expense of fellow HOF’er Patrick Ewing of the NY Knicks, during Game 6 of the ‘94 Eastern Semi-Finals. Watch as he jams in Ewings face, stands over him as a punctuation mark, and even points and taunts Spike Lee sitting courtside.

This dunk usually ranks in the Top 10 of everyone’s best all-time Playoff dunks:

Even the “Mailman”, Karl Malone wasn’t immune to being posterized by Pippen in ‘97:

Check out a video of Scottie Pippen’s Top 10 All Time Dunks: