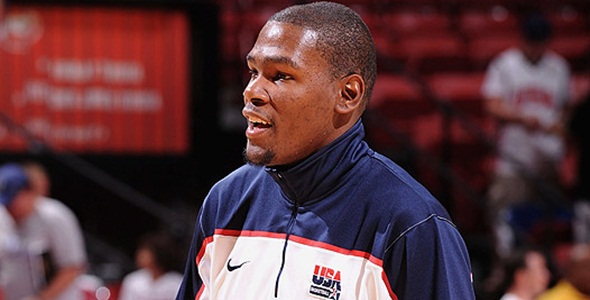 When the FIBA World Championships officially begins next week, Team USA will be in an unfamiliar position: the underdog. Okay so maybe not exactly the ‘underdog’ but Team USA is definitely not the clear cut favorite. Long used to being favored in Olympic competition, this time around, it appears as if the rest of the world has narrowed the gap between the once dominating US professional players and international pros playing for their country. In fact, the last time the US won gold at the Worlds was nearly 15 years ago, back in 1996.

More evidence of international play catching up to traditional NBA play is Sunday’s thrilling exhibition game against Spain, in the Global Community Cup Finals. After not having much difficulty against an up and coming Lithuanian squad earlier in the week, the Spaniards actually held a 2 point lead with just under a minute to play, until Derrick Rose nailed a driving lay-up, plus the foul, and Rudy Fernandez of Spain’s final shot attempt from the left corner was blocked by Kevin Durant, giving USA a hard fought 86-85 victory.

Durant was at times spectacular in the contest, finishing with a game high 25 points, and also earned the MVP award for the event. He shot an impressive 9 for 16 from the field, and for added measure, swiped 10 boards. His lengthy 6‘11 frame continually caused fits for Spanish defenders as the team drew blanks after assigning virtually every player on the roster to try and stop the NBA’s youngest ever scoring champion. After sitting out the 2nd half of the game against Lithuania, Derrick Rose was also impressive, using his overpowering upper body strength to score on numerous hard-nosed drives to the basket and high ‘degree of difficulty’ spinning lay-ups. While Rose sat in the previous game, in this game against Spain it was Rajon Rondo’s turn for a DNP-Coaches Decision, fueling speculation that he, along with Russell Westbrook, Eric Gordon, and the semi-injured Steph Curry are all vying for the final available roster spot on Team USA heading into the World Championships in Turkey.

After leading by nearly 15 points halfway through the contest, Spain charged back in the 2nd half by immediately nailing a trey on the first possession of the 3rd quarter. Continuous clutch plays by current NBA players Rudy Fernandez, Marc Gasol, Victor Claver, Juan Carlos Navarro, and future star Ricky Rubio, fueled an impressive comeback which almost secured a victory in what was possibly a preview of the FIBA World Championship Finals match-up. Considering the fact that Spain was without the considerable talents of 2 time NBA Champ Pau Gasol, the last second loss has to be a moral victory for the squad who could be considered the favorite to win, when the official action begins next weekend.

Did the Spaniards play up to the skill level of their competition or are these closely contested match-ups to be expected with USA without the services of Lebron, Carmelo, Stoudemire, and Wade?