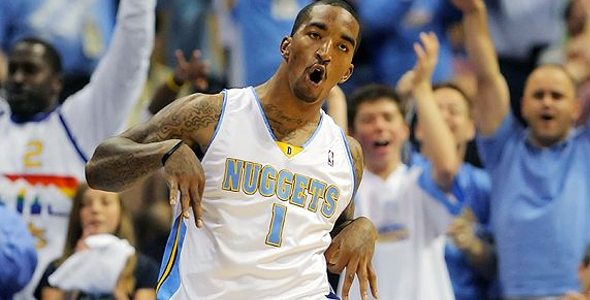 Reports are surfacing that J.R. Smith of the Denver Nuggets had to deal with a police inquiry on August 13th after a Nuggets practice in Denver at their practice facility. Apparently the Nuggets Coaching Staff asked an invited D-League player to ‘play physical with Smith on defense’ which went sour fast as J.R. took exception to being roughed up, and had what is being called ‘an altercation’ with his defender.

“We did have a report of an altercation that took place at the Denver Nuggets’ practice facility,” Detective John White of the Denver Police Department told FanHouse by phone. “That case was investigated and ultimately presented to the district attorney’s office. … Ultimately, the district attorney’s office, after being presented with the findings by the Denver Police Department, decided not to pursue charges.

“We were called to that location about an incident possibly involving Mr. Smith. When we got there, the officers conducted their investigation. It did involve Mr. Smith.”{via}

Clearly not appreciating the rough play from an outsider to the team, Smith lost it and attacked the player, going as far as trying to choke him which prevoked the player to call the police. There has never been a shortage of controversy following this current Nuggets squad and specifically J.R. Smith. Rumors this week were swirling that the Nuggets had J.R. Smith on the trading block. A few more incidents like this and the Nuggets may seek to move Smith sooner rather than later.