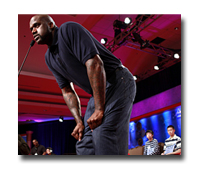 Some days you love Shaquille O’Neal, and some days you may grow tired and weary of his over the top media and public relations stunts. Well it is days like this that I love the Big Fella.

Thanks to Ryan Wilson over at Backporch Fanhouse we got wind of the latest Shaquille O’Neal appearance. In the midst of the Scripps 83rd National Spelling Bee, Shaquille O’Neal walked on stage and challenged last year’s champion, Kavya Shivashankar, to a ‘spell-off’.

The 7-foot-1 center created a buzz when he threw down his challenge to 14-year-old Kavya Shivashankar, the 2009 champion. Reporters were not allowed to watch the showdown, which was taped for O’Neal’s “Shaq Vs.” reality show, but O’Neal then posed with the 10 remaining spellers. {via}

Although his appearance and spell-off was taped in order to air on his TV Show ‘Shaq-Vs’, you have to be grateful to the big man for shining some of his enormous spot light onto the academic accomplishments of these young children. Shaq hits the nail on the head when being interviewed about how intelligent these kids are, not only for their age, but for any age.

“I have a bachelors and a masters and there were like 10 words this morning that I have never heard of,” Shaq told an WMAR reporter. “… These kids are super intelligent and even the ones that misspelled the words that I never heard or seen before, I’m very proud of them…