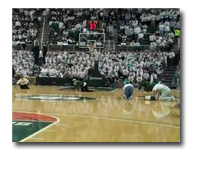 In Sunday’s Michigan State win over Michigan 64-48, the half-time show had most howling and a few others disgusted by the concept. Personally, I think it was absolutely hilarious and it reminded me of a similar ‘pub game’ from my College days. Although what the Michigan State fans were doing was much cleaner (and safer) than crawling around on a pub floor. The game was ‘Crawl for Cash’ where a select group of Michigan State fans were blindfolded and placed on the basketball court where they were left to their own devices to find the strategically placed bags of money before their fellow Spartans claimed the prizes.