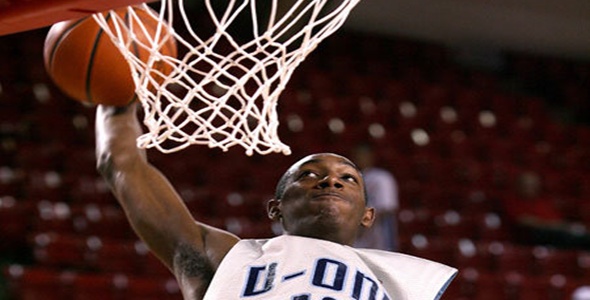 Every year, a player comes highly recruited out of the high school ranks and is dubbed as the next big thing. Very few of those players live up to the hype of being a Top 10 recruit. This last season was the exception as we have seen John Wall explode onto the collegiate landscape by hitting a game winning shot in his first NCAA contest, en route to possibly the Naismith Player of the Year Award and #1 pick in this year’s NBA Draft.

Next year’s crop of heralded recruits are led by Harrison Barnes(UNC), Brandon Knight(Undecided), and Jared Sullinger(Ohio State), who expect to pay immediate dividends in the college ranks next year. But one player has the type of freakish athletic ability to not only be the NCAA’s next big star, but projects as a future NBA superstar as well. 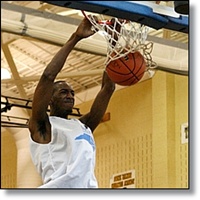 Remember the name: CJ Leslie. Playing at Word Of God, which coincidentally was where John Wall played his HS ball last season, Leslie has the potential to be next season’s version of his former teammate from either the SF or PF position. At 6’8 and 205 lbs, Leslie is a Kevin Garnett clone, who can both take it to the rim with authority and keep defenses honest by hitting 18 foot jumpers, as well as being a shot blocking presence in the paint. Seriously, take a look at some of KG in HS, they are eerily similar. He rates as the #14th best player in the 2010 recruiting class and was chosen to participate in this year’s McDonald’s All American Game and the Jordan Brand Classic.

What lucky collegiate team is in line to get a commitment from Leslie?  He claims to have narrowed his choices to Kentucky, Maryland, Oregon(?), Georgetown, Florida, and NC State. Leslie actually gave a verbal commitment to coach Sidney Lowe at NC State early in the recruiting period but has backed out since his stock has sky-rocketed after his impressive senior season. Rumor has it that Kentucky is the front-runner since coach Calipari was seen sitting courtside, at a number of his games and because of the influence of his former teammate, John Wall.

Would Wall consider staying another year in Lexington to play alongside his former HS teammate? Probably not, since he is projected as the #1 pick, but a lot will be determined by how far the Wildcats go in the NCAA Tournament.