Lebron’s Vicious Bread and Butter on the Knicks [Video] 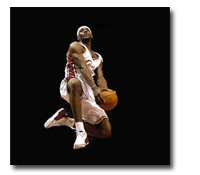 If you thought the New York fans and media were salivating over Lebron Summer 2010 before, how must they feel after Lebron did this to the Knicks the other night (dunk wasn’t allowed, but still)? The Cavs clowned the Knicks bad all game. It looked like the Cavs were playing a team of high school preps.

On the other hand, how must you feel if you are one of Lebron James’ teammates and get to play alongside his athleticism on a nightly basis. For example take Delonte West on this play below. He literally sees Lebron running to the hoop, so he just throws the ball semi-wildly over his head toward the basket, knowing full well that there is no such thing as a bad pass/alley-oop to Lebron James. No matter where it is he will chase it down for the dunk. In this case, ‘bread and butter’ baby: