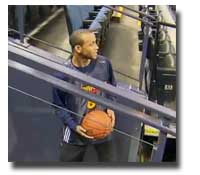 Golden State Warriors enigmatic point guard sensation, Monta Ellis, has been languishing getting more shots in the Don Nelson designed Warrior offense since Stephen Jackson was dealt to the Charlotte Bobcats some time ago. He has been putting up All-Star caliber numbers like 32 ppg, 7 assists, and 3 steals over the past month.

At age 24, Ellis is one of the league’s fastest rising young stars and has earned a number of accolades including the NBA’s Most Improved Player(’07) and became only 1 of 8 players in league history to shoot more than 60% from the field for a single month(Feb ’08).

Although he is averaging an impressive 26.1 ppg this season, which ranks 5th in the league, he still remains one of the prime candidates to be moved by the February trade deadline.

He obviously has too much extra time before and after practice as evidence of this video where he pulls off an unbelievable trick shot where he makes a shot from the ramp to the Warriors locker room, with his back to the basket.