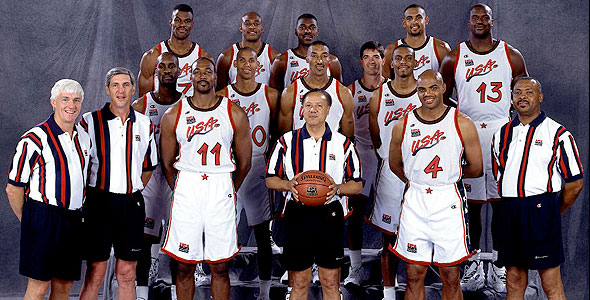 Most people remember the original USA Basketball Dream Team. You know………….. the group of players that was regarded as perhaps the greatest team ever assembled in any sport. The squad, consisting of 11 NBA superstars such as Jordan, Magic, and Bird and one college player(Laettner), that demolished their opponents in the ’92 Olympics by an unbelievable 44 ppg. It was the first team of professional athletes to represent the United States in international competition. They were dominant on the world stage. Boy did they have some serious basketball training.

Fifteen years ago, in October of 1994, USA Basketball formed their 2nd group of NBA stars that would compete in the ’94 FIBA World Championships as an audition and warm up to the ’96 Games in Atlanta. The squad that would come to be known as “Dream Team II“, was slightly less star studded but were almost as dominant by winning the gold medal in the ’94 World Championships.

The original roster for the second “Dream Team” for the ’94 World Championships was coached by Don Nelson, and made up of a more brash and brazen collection of NBA players like Larry Johnson, Derrick Coleman, Alonzo Mourning, Reggie Miller, Shaq who was MVP of the event, and Shawn Kemp, who even though they dominated the competition by more than 37 ppg, going 8-0 and winning the gold medal, they did it in a more arrogant fashion than their predecessors by regularly taunting and intimidating their opponents. The squad was even dubbed the “All Principal’s Office Team” by many media outlets because while supremely talented, the players did not conduct themselves with the respect and dignity that USA Basketball had come to expect from the crop of first Dream Team players like Michael Jordan, John Stockton, David Robinson, and Scottie Pippen. C.M. Newton, who was President of USA Basketball Selection Committee, vowed that the team that the US would send to the ’96 Olympic Games in Atlanta would,” be a squad with character, not characters.”

The Selection Committee had a tough task in forming Dream Team III for the ’96 Olympics since the original and second teams destroyed the worldwide competition so soundly and created a media circus, any team assembled after them would pale in comparison. Even though the main theme for the third team was to showcase different NBA players than the ’92 record breaking squad, the players bad behavior in the World Championships forced USA Basketball to totally redo the roster for the ’96 Olympics. The only holdovers from the World Championship squad were Shaquille O’Neal and Reggie Miller who were the team’s leading scorers. Solid citizens like Hakeem Olajuwon, Grant Hill, and David Robinson were brought in to reflect a little more respectability to the US team. Dream Team I members Scottie Pippen, Karl Malone, John Stockton, and Charles Barkley were also convinced to return to try to win the gold medal again in Atlanta. The NBA’s All Time winningest coach, Lenny Wilkens was brought in to run the squad.

While the third Dream Team could never compare to the original, they also dominated the international competition by an amazing 32 ppg average and set 4 Olympic basketball records that still stand today. The team cruised through the qualifying rounds, demolishing teams before record crowds, and being led by a seemingly different leading scorer each night, setting up a final game against Yugoslavia led by NBA player Vlade Divac, who were also a perfect 7-0 going into the Gold Medal Game. Things didn’t look good for the US team leading up to halftime, when because of poor shooting, they actually were trailing most of the game to that point before taking a 43-38 halftime lead. Led by the imposing frontcourt of 7 footers like David Robinson, O’Neal and Olajuwon, and a tightening of their defense led by Reggie Miller, Gary Payton, and Scottie Pippen, the US team pulled away for a 95-69 win to take home the gold medal. It was a coming out party for Reggie Miller, Robinson, and Barkley who proved to be no match for international players.

Many people forget about Dream Team III, which one could argue was just as dominant as the original. I have seen many articles comparing the ’08 Redeem Team vs the original ’92 Dream Team, but one could even make an arguement that the 2nd or 3rd squad actually would have won a head to head matchup against either since, although on paper the original team of Jordan, Bird, and Magic is All Worldly, most of those players were past their prime, with the exception of Jordan, Pippen, and Robinson, and added to the roster for star power. The second and third groups were all in the midst of their best years, and were a tad younger. The 2000 team led by Vince Carter, who dunked over the 7 foot Frederick Weiss, also deserves a nod.

In your opinion, which of the US Basketball Olympic teams were the best?

Here is the Top 10 Plays from Dream Team II in the ’94 FIBA World Championships:

Check out some top plays of Dream Team III in the ’96 Olympics: