Which of Wilt Chamberlain’s 72 NBA Records Are the Toughest to Break?

admin September 8, 2009 Allen Moll 22 Comments on Which of Wilt Chamberlain’s 72 NBA Records Are the Toughest to Break? 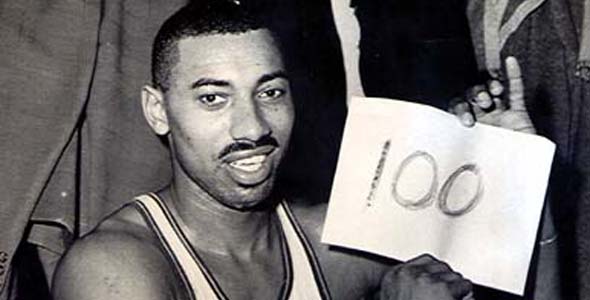 We all know that “The Big Dipper”, Wilt Chamberlain, is one of the greatest and most dominant NBA players in the history of the sport. He was so much better than his contemporaries that the league was forced to change many of the game’s rules like widening the lane, and instituting offensive goaltending and changing out of bounds passing rules, since he would leap from out of bounds to deposit the ball in the basket, without a step.

In my opinion, he is in the discussion with Jordan, Kareem, and “The Big O” Oscar Robertson, as the Greatest of All-Time. With all due respect to MJ, Chamberlain was the most dominating offensive force to ever play the game. When Kobe Bryant scored 81 points in a game in ’06, he instantly became one of the rare, few players to come within reach of one of Wilt’s 72 NBA records, like scoring 100 points in a game. Let’s take a closer look at some of his astronomical career numbers and astounding scoring and rebounding records that will probably never be broken:

Most Rebounds in a Single Game – 55

In addition to scoring, Wilt along with Bill Russell were the two most dominating rebounders in league history. He pulled down a record 55 boards against Russell’s Celtics during his 2nd NBA season in 1960. The closest in the modern era was Charles Oakley with 35 in 1988. Wilt also holds the rookie single game record with 45 rebounds.

Wilt is the only player to AVERAGE more than 40 or 50 points in a single season, further strengthening the argument that he was the league’s best offensive player, ever. He holds the top 4, and 5 of the 6 best single season scoring average seasons in history. The legendary MJ’s best single season was 37.0 ppg in ’86-’87. Of active players, Kobe Bryant averaged 35.4 ppg in ’05-’06 but isn’t likely to approach those numbers with such a great supporting cast in LA.

In today’s NBA standards, it is considered good for a rookie to average 20 ppg in their rookie season. As a rookie in 1959, Wilt averaged 37.6 points and 27.0 rebounds(also a rookie record). He also holds the record for most points and rebounds by a rookie in their first game with 43 points and 28 rebounds.

Most Points in a Single Season – 4029 Points

Only Player in History to have a Double – Triple Double

Wilt showed his versatility by scoring 22 points, grabbing 25 rebounds, and dropping 21 assists in a game in 1968. The only player to come remotely close in terms of volume of triple doubles is Oscar Robertson who tallied 41 triple doubles in ’61-’62.