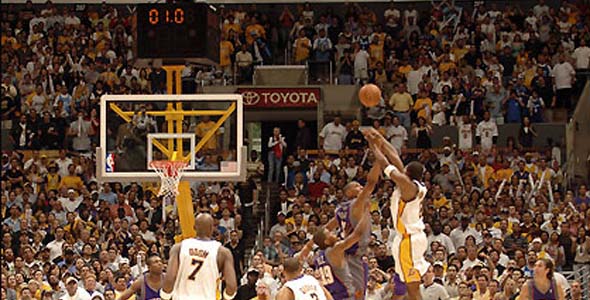 After a game four loss in the NBA Finals, Orlando Magic coach Stan Van Gundy said “experience was not a factor.” I respectfully disagree.

Clearly, we can look at the result in this year’s finals as proof of the opposite. We can look at Game 4 where the Lakers’ Derek Fisher, who had missed all his previous attempts in the game, made two clutch three-pointers to clinch the game and with it, the series. Experience comes in many forms, one of which is clutch shooting, which was clearly a factor. Clutch, in this sense, means who is the deadliest shooter when a game is on the line.

Just looking around the league, in anticipation of next season, there seems to be a clear relationship between experience, clutch shooting and winning. Seems easy enough. This is not, however, obvious to Van Gundy who said “[experience] had nothing to do with anything. Nothing…it’s just too cliché that it’s all about finals experience.” Perhaps, Van Gundy has a good point. When the Dallas Mavericks and Miami Heat met in 2006, neither had any finals experience, and yet somebody still had to win. But when an inexperienced team plays against a more experienced team, this “cliché” comes into play. See the San Antonio Spurs against the Cleveland Cavaliers in ’07, a 4-0 rout. Or the ’09 Finals between the Magic and the Los Angeles Lakers, a 4-1 rout.

Without the clutch and experienced play of Derek Fisher, the 2009 Lakers might have fallen short of the title. But, in addition to Fisher, who else is likely to break your heart when they rise up for a shot at the end of the game? Unfortunately for Van Gundy, a lot of these experienced shooters play for the best teams.

Top 15 Clutch Shooters in the NBA

15. Stephen Jackson, Golden State — attitude, confidence, make or miss, his last second shots always look like they have a chance to drop. And when it does, get ready for that classic Jackson glare. Although his team hasn’t made it to the playoffs since ’07, his regular season exploits sure fill up the highlight reel.

14. Mehmet Okur, Utah—at the end of a tight game, they’d rather give him the ball win or lose than give it Kyle Korver or Carlos Boozer. Deron Williams, however, is quickly taking on this role more frequently. Okur shot 44.6% from 3-point range in 2008-2009.

13. Mike Bibby, Atlanta—despite the likes of Joe Johnson and Josh Smith, Bibby is still relied upon as their top clutch shooter. Known best for his late-game exploits with the Sacramento Kings, Bibby has shown he can still produce in the playoffs, especially in crunch time. In the ’09 playoffs, Bibby increased his 3-point percentage to 54.2%.

12. Eddie House, Boston—often overlooked because of the likes of Ray Allen and Paul Pierce, House will bury any team if they leave him open for a corner three, especially at the end of games. Leaving Allen off this list in favor of House is a result of Allen’s often disappointing playoff performances with the Boston Celtics. Sure, this year he made one clutch shot against the Bulls in Game 2. How many other clutch shots did he make these playoffs? What about last year’s finals and his famous disappearing act? Unlike last year, where Allen’s numbers stayed about the same in the playoffs as the regular season, in the ’09 playoffs, Allen’s numbers dropped significantly (-5% in 3’s). House, on the other hand, raised his field goal and 3-point percentages from 44% in the regular season to 51.9 FG and 48.6% 3pt in the ’09 playoffs.

11. Derek Fisher, Lakers—he has to make this list if only based on his merits. Has anyone else in the NBA ever made a turnaround game-winner in 0.4 seconds? In 2009, he added more exploits in his now famous game 4, where he drilled a pair of threes, one to send the game into overtime, and the other to take the lead in overtime. As opposed to his numbers last playoffs which increased (field goals and 3-point percentage), this year Fisher’s three’s dropped down to a pitiful 28.6%. But, hey, he made the ones that counted most (just like Shaquille O’Neil would say about his own free throws).

10. Tim Duncan, Spurs—Duncan improved on his regular season field goal percentage by 3%, up to 53%.*

9. Manu Ginobli, Spurs—Ginobli was injured these last playoffs, but his career numbers show consistency. When he gets to the playoffs, his scoring increases and his percentages remain about the same.*

8. Tony Parker, Spurs—Parker, similar to Fisher, shows signs of slowing down and shooting worse in the playoffs, even though he consistently scores more points. Still, on or off, I would not give him an open shot in a close game. *Perhaps none of these three Spurs are the best shooters, but would you let them shoot one with a chance to win the game? Me neither. Although none are the purest shooters, they’ve all hit game-winning and game-changing shots. Dirk Nowitzki thought otherwise in the ’07 playoffs, but, with the game on the line, Duncan came through and hit his only three of that season. The Spurs went on to win the series. If we still doubt that they can come up big in the clutch, see their multiple championships (4).

7. Ben Gordon, Detroit—formerly the go-to-guy in Chicago before Derrick Rose came to town. Similar to Parker, Gordon becomes a volume scorer in the playoffs, his scoring increasing, but shooting decreasing. Nonetheless, you need a clutch shot, he’ll take it and likely make it. Before leaving the team, Gordon put on a game to remember scoring 42 against the Celtics in the ’09 playoffs.

6. Dirk Nowitzki, Dallas—although his exploits are nearly forgotten with his team’s downfall from the Finals to barely making the playoffs, Nowitzki is still a great clutch shooter. When Nowitzki figures out how to make 3’s in the playoffs, he’ll be better suited for this list. Even so, his ’09 playoff free throw, 92.5%, and field goal, 51.8 %, numbers were career highs, so maybe he’s learning. And, even though the Mavericks didn’t make it any further than the second round of the playoffs, in the series clinching game (Game 5), Nowitzki drilled some clutch shots, including one with less than a minute left, to sink the Spurs.

5. Hedo Turkoglu, Toronto—last season, Turk probably hit more clutch shots than anyone, but with a new home and a new team this season, it will be interesting if he still gets those same opportunities to be a game-saver. In the ’09 playoffs, Turkoglu showed he understands the moment by increasing his free throw, field goal, and 3-point percentages.

4. Chauncey Billups, Denver—you don’t get a name like Chauncey “Big Shot” Billups without being dependable. He’s not perfect—everybody misses sometimes like he did these playoffs against the Lakers, but he really earned this nickname in Detroit. Nonetheless, in ’09 Billups really kicked it up, increasing his scoring to 20.6, and his 3-pointers to 46.8%.

3. Dwayne Wade, Miami—since his 2004 game-winning playoff shot over then Hornet Baron Davis, Wade has been feared by his peers. In the ’09 playoffs, Wade increased his 3-point percentage by about 5% and his free throw percentage by almost 10%. Last season he made lots of clutch shots. One of the most memorable was in a regular season game in Miami, against the Chicago Bulls, where, with little time left, Wade got a steal, dribbled down court, hit a running jumper for the win and ran up onto the scorer’s table, repeatedly and passionately yelling that this was “his house.”

2. Paul Pierce, Boston—in Boston, if you need a shot, you look no further than this man. Statistics don’t tell the whole story on Pierce because his career performances in the regular season are better than his performances in the playoffs. When they won the title, though, Pierce put up nice numbers. 19.7 ppg, 4.6 apg, 5 rpg. Despite what he averages, he is still usually given the chance to win the game if it is close. On their way to a title in 2008, Pierce repeatedly threw in clutch shots against Atlanta, and the L.A. Lakers, among others. As a Laker fan, I laughed at Pierce’s infamous NBA Finals wheelchair incident, only to cry minutes later when he busted threes on the Lakers with time running out.

1. Kobe Bryant, Lakers—almost every player in the NBA today will tell you: Kobe is unstoppable. He is the most feared shooter, especially at the end of the game. His ’06 playoff shot against the Suns (Shaq-less). His ’01 Finals shots at the end of a game against the Pacers (with Shaquille fouled out). In the ’09 playoffs, Bryant pushed his scoring average up 5 points to 30.2 ppg and increased his free throw percentage by 4% to 88.3%. In these same playoffs, he made clutch shots against the Utah Jazz and the Denver Nuggets. What makes Bryant a clear #1 to me happened in the first televised USA Olympic practice game in ’08. Here, in the Olympics, only the cream of the crop play, period. When the game was close and nearly over, the ball went to Kobe where he schooled LeBron James with a clutch shot to win the game.

Will They Return to Form?
Jordan Farmar—after a season full of clutch shots, last season was hugely disappointing for Farmar in terms of his development
Gilbert Arenas—how many surgeries can one knee take? 4…5? He might be okay, just ask Grant Hill. Before going out injured, again, Arenas had been developing his skill as one of the games best marksmen.

Up and Coming
Brandon Roy—last season’s playoffs gave room for Roy to come up huge with 42 points in a game 2 win over Houston. Late in that close game, Roy made some very clutch shots, including a three with two minutes and counting. During the regular season, too, Roy hit several game-winners.
LeBron James—last season’s playoffs showcased that LeBron can hit huge shots, as he demonstrated by hitting a game winner in the Eastern Conference Finals.
Big Baby Glenn Davis—the absence of Kevin Garnett from the playoff roster allowed Davis to drill two game-winning shots in the ’09 playoffs.

The Pattern? Almost every single team on this list is playoff bound. Although Arenas’ Wizards were awful last season, they’ve made some of the best off-season moves and Arenas should be healthy, and this at least gives them a shot to make the playoffs. Even Turkoglu and Bosh should help push Toronto into the playoffs this season. The only really glaring exception is Stephen Jackson and the Golden State Warriors, who are, sorry fans, going no where fast in a highly competitive Western Conference. More than just playoff bound teams, most of the best clutch shooters in the NBA today play for some of the top teams: the Lakers, Celtics, Spurs, and Nuggets. Hmmm, now one team is visibly absent from this list…oh yeah, Orlando.

Too cliché, Van Gundy? Basketball is all about clichés. Take Phil Jackson’s mantra, which has now become Bryant’s: take it one game at a time. Defense wins championships may be cliché but it worked for Boston in ‘08. But, hey, maybe Van Gundy’s right and Orlando’s loss to the Lakers in the Finals had nothing to do with experience, nothing to do with clutch shooting, and nothing to do with the Magic living and dying by the three.