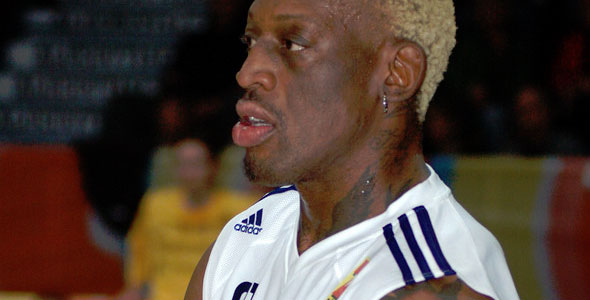 We all know that 5 time NBA Champion Dennis Rodman, also known fittingly as”The Worm“, loves to be the center of attention. He always found some way of entertaining spectators in NBA arenas during his playing days by either grabbing double digit rebounds, shutting down bigger defenders, or by sporting his multi-colored hairstyles. Even while in retirement, Rodman, now 48, has found ways to remain somewhat relevant by making many appearances on reality TV shows and even Howard Stern’s radio program on Sirius Satellite Radio.

Rodman’s most recent endeavor has he, along with a few other former NBA players, headlining the Street Basketball Association’s(SBA) upcoming European Tour which takes place November 9th through the 16th in various venues throughout Europe. What makes this event interesting is that 5 former NBA veterans will join a group of streetball All-Stars to put on an exhibition and compete against teams made up of the best streetballers and competitive players that each city on the tour has to offer. Rodman will be joined by Tim Hardaway, a 5 time All-Star and Olympic Gold Medalist, Dee Brown, the former Slam Dunk Champion who won with his signature “no look” dunk, Dale Ellis who is one of the NBA’s All-Time best 3 point shooters and former Phoenix Sun, Oliver Miller. The SBA All-Stars include some heavy hitters of the And 1 and Ball 4 Real circuits like Hot Sauce, Air Up There, also know as “Mr. 720”, Baby Shaq, Pat Da-Roc, High Rizer, Air Bama, Aggressor, and 7 & Sum Change.

The event was put together by former ACC standout at Maryland and NBA veteran Jerrod Mustaf, who is currently the President of the SBA. Mustaf was drafted #17 in the ’90 draft by the NY Knicks, were he lasted two seasons before playing another two years for the Phoenix Suns, most notably during the ’93 Finals. He then won 2 championships in Europe before retiring in 2001.

The tour has already booked 6 venues at various cities within Belgium and Germany and expect its growing popularity to extend to other cities through the end of November. Rodman’s overwhelming popularity and almost cult following since his playing days in markets like Europe and Asia figure to help promote the SBA’s exciting brand of basketball worldwide.

Here is some footage of the best dunker in the world, Air Up There, aka”Mr 720″.

Here is some highlights of “The Worm” Dennis Rodman: