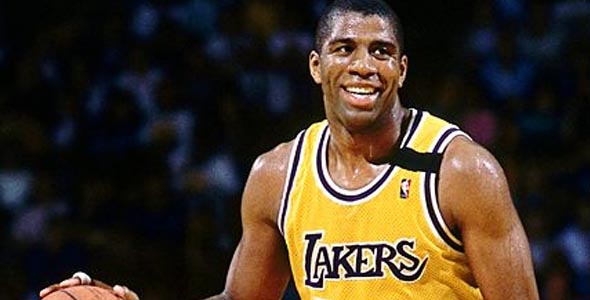 Not only is Earvin ‘Magic’ Johnson Jr. one of the greatest basketball players to ever don an NBA jersey, he is also one of the biggest and brightest personalities the NBA has ever seen. He is charismatic, energetic, kind, and truly wise about the game. As a point guard myself, like all other young point guards growing up in the 80’s, Magic Johnson was truly a hero and the type of baller that I aspired to be. The type of unselfish player that would do whatever it took to win. He could play every position on the floor, and actually did, logging some time for the Lakers in the post season at the Center position. Not bad for a point guard. Think about it though. Can you imagine in the modern NBA era, a Steve Nash trying to guard a Dwight Howard in the paint? Not so much. Magic was truly one of a kind.

Magic was a leader of the “Showtime Lakers”, collectively one of the best teams to ever take the floor in NBA history. Today Earvin ‘Magic’ Johnson turns 50 years of age, and there will certainly be lots of Magic Johnson coverage around the web. But The Hoop Doctors want you all to take a moment to watch a video or two of Magic Johnson highlights as a reminder of just how great a player the man was. In my book he’s a Top 5 All-time talent. Certainly the most talented point guard ever. So check out this amazing Magic Johnson assist compilation below. But don’t stop there. YouTube the hell out of the man today, it’s his birthday.