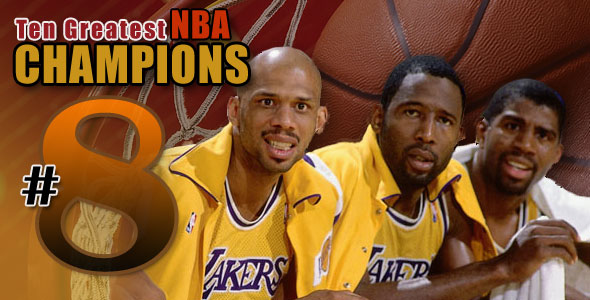 During the 1980’s the Los Angeles Lakers brand of basketball was famously known as “Showtime”. During that span the Lakers reached the NBA Finals 8 times, winning 5 titles. The 84′-85′ Laker team was my pick as the best during that era. Although other Laker teams have had better regular season records, this team was the most dominant of the group during the 80’s. They boasted 5 future Hall of Famers, three in the starting lineup( Jabbar, Johnson, Worthy), along with Bob McAdoo off the bench, and Coach Pat Riley.

In a regular season where a dazzling rookie named Michael Jordan started his legacy, the Lakers dominated the Western Conference finishing 62-20, winning the Pacific Division by 20 games over second place Portland. They were led by Kareem averaging 22 points and 8 rebounds and Magic Johnson averaging 18 points and 12.6 assists, which ranked 2nd in the NBA. The Lakers ran through the playoffs by sweeping Phoenix 3-0, besting Portland 4-1, and Denver 4-1 in the Western Finals, setting up a rematch of last season’s Championship loss with the Boston Celtics.

The Celtics, because of a better regular season record, had home court advantage. In one of the series’ most memorable moments, the Celtics destroyed the Lakers 148-114 in Game 1, which was forever dubbed “The Memorial Day Massacre”. Until 2008, this was the biggest margin of victory in Finals history. In the game, Jabbar was limited to only 12 points and 3 rebounds. Kareem, and the rest of the team, redeemed himself, by averaging 30 points, 12 rebounds, and 5 assists in the remainder of the series earning him Finals MVP, becoming the oldest player to do so at age 38. Magic Johnson averaged an amazing 15.2 assists throughout the playoffs. They key to the Lakers winning their 8th title, and first over the rival Celtics, was Cooper’s defense on Larry Bird and the depth of their bench. It was also the first and only time an opposing team had won an NBA title in the Boston Garden. This Lakers team may by some, be considered to have been one of the best in NBA history but they come in #8 in the list of Greatest NBA Champions since 1980.

Here is some footage of the Lakers winning Game 6 and celebrating at the Boston Garden: