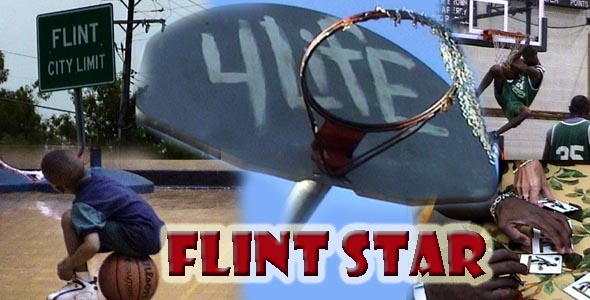 “Flint Star,” the inspiring documentary created by a Flint, Michigan teacher Marcus Davenport and produced by Big Thangs Production, literally takes the viewer through the streets and gyms of Flint to discover the vast effect that basketball has on the fifth largest city in Michigan. While Flint is notorious worldwide as the birthplace of the American auto industry in General Motors, according to a resident, “Without basketball, Flint would be a ghost-town.”

Basketball in Flint proves to be an outlet for youth looking to escape the ruthless truths that the impoverished and dangerous city brings every day. As one local player explains, “If I ain’t hoopin’, then I’m doin the wrong thing. I’d rather have a basketball in my hand than a gun.” Former 2000 first-round pick and Flint native Mateen Cleaves further explains this way of thought. Cleaves, “always dreamed about getting out of the neighborhood.” Everything he did was inevitably for basketball. Cleaves explained that he went to school and got acceptable grades so he could put food on the table for him and his family.

From birth, growing up in this Mecca of basketball tradition sets the bar high and promotes hard work and determination; nothing different from the ideals in which the blue-collar city of Flint was built on. Local sports broadcaster William McNeal explains, “It is not uncommon to see some of the top players in this city at the YMCA at two o’clock in the morning for pick-up basketball games.” Everyone in Flint plays basketball and everyone strives to be even better than past legends.

As the recently coined “3rd most dangerous place to live in the country,” the struggle to just survive in Flint is a daunting task in itself. This tough, hard-nosed atmosphere of Flint has a dramatic influence on the players the city produces and gives the viewer an appreciation for just how hard these kids work. Just as a “New York point guard” is branded, Flint players carry their struggle and their cities struggle right on their sleeve. The city molds the players just as the players mold the city. As a local resident explains, “See, Flint athletes come with attitude. We all think we the shit, everyone in the city in Flint think they the shit. That’s why them boys play like that.”

The swagger that Flint natives bring to the court is unique. And while it seems as if everyone in “Flint Star” has that attitude, let it be known that “Flint Swagger” is earned, not given. The hard-nosed mindset of Flint, Michigan and its history positively permeates into its residents’ true religion – basketball.

If you want to see this raw and gripping basketball documentary, you can order it here.