admin February 16, 2009 Blogs 2 Comments on Shaquille O’Neal is what the All-star Game is All About 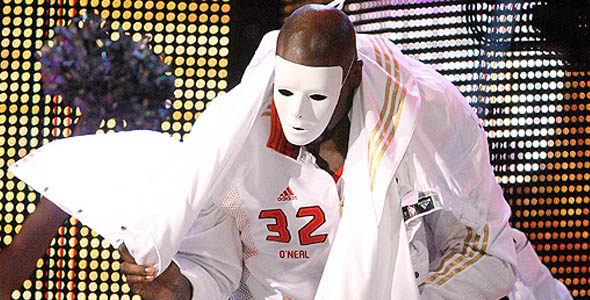 Shaquille O’Neal knows what the all-star game is all about. Maybe because he has played in more all-star games than any other active player, or maybe it’s because it fits his lighthearted, child-like personality to perfection. Regardless of why, Shaq makes the all-star game fun and exciting for the fans. I was very happy to see Shaq win co-MVP of the All-star Game this weekend, as it could very well be one of his last year’s playing in the game.

A lot of people were talking on Sunday about how the Dunk Contest on Saturday night seemed like it was almost scripted by the NBA, with Dwight ‘Superman’ Howard taking on Nate ‘Kryptonate’ Robinson…..But how about Shaquille O’Neal winning co-MVP with his past running mate on the Lakers, Kobe Bryant? Could that have been scripted any better for the league? Possibly one of the greatest duo’s of all-time, swallow their issues with eachother and join forces once again to lead the Western Conference to a dominant win the All-star game? David Stern is smiling somewhere right now…

But enough about Kobe-Shaq….how about that Shaquille O’Neal pre-game introduction? If that doesn’t have you in stitches and off your seat, better check for a pulse. If you didn’t catch the pre-game Shaquille O’Neal was introduced with the Jabbawockeez dance crew, and came out to a perfectly choreographed performance. It was gold, here is the vid:

There was many exciting plays in the game that we could show you, but since Shaq deservedly won the MVP of the game we wanted you to be able to replay this video over and over and over. After Shaquille O’Neal and Dwight Howard spent much of the game trash talking one another about who the ‘Real Superman’ is now, Shaquille O’Neal put a school yard move on Dwight Howard that showed the world that Dwight Howard is nothing more than ‘Superboy’. It also showed Dwight that being a crafty veteran, can trump dominant youth and athleticism any day of the week. Check it out: