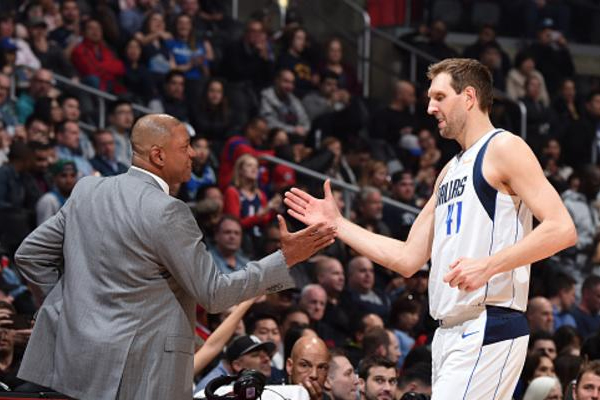 With the Clippers holding a 121-112 lead over the Mavericks, Clippers coach Doc Rivers called a timeout with 9.4 seconds left on the clock, a move that left many confused and no one could have anticipated what happened next.

Rivers walked over to the scorer’s table, picked up the microphone and gave an impromptu tribute to Nowitzki, the legendary face of the Dallas Mavericks franchise who is in his 21st season.

Wow. Legendary coach @DocRivers STOPS THE GAME to hop on the P.A. system and call @swish41 the greatest.#MFFL pic.twitter.com/ESOOFmdcNp

“Dirk! Dirk!” Rivers yelled, gesturing to the crowd to show its appreciation. “One of the greatest of all time, Dirk Nowitzki!”

Nowitzki, who was standing in the paint, responded with a sheepish smile and a thumbs-up before waving to the cheering Staples Center crowd. Several Clippers approached Nowitzki to congratulate him on his career as the ovation continued.

“It was sweet. I’m really appreciative,” Nowitzki said. “At first, I was like, ‘Why is Doc calling a timeout? What’s he doing with [9.4] seconds left? What’s he up to?’ Then he grabbed the mic. I didn’t really understand much, but that was really humbling. That was an emotional moment.”

Rivers said he didn’t plan the tribute, but he seized the opportunity to give Nowitzki a worthy sendoff, having regretted not having done so for the retiring Dwyane Wade when the Miami Heat visited earlier this season.

“That was just, we had a lead and I had a timeout,” Rivers said. “Honestly, I didn’t plan it. I just felt like he deserved that.

“You know what’s funny, was it Miami? I thought we didn’t give [Dwyane] Wade, like it was a close game and I think they won the game and Wade played like he should play five more years — so I wasn’t going to let that happen again. I just did it.”

“It was one of the greatest things I’ve seen,” Carlisle said. “I know there will be more moments similar to that, but this was an original. I’ve never seen something like this.”

It was the continuation of an unofficial farewell tour for Nowitzki. He scored 12 points in his second start of the season and became just the fourth player in NBA history to appear in 1,500 career games.