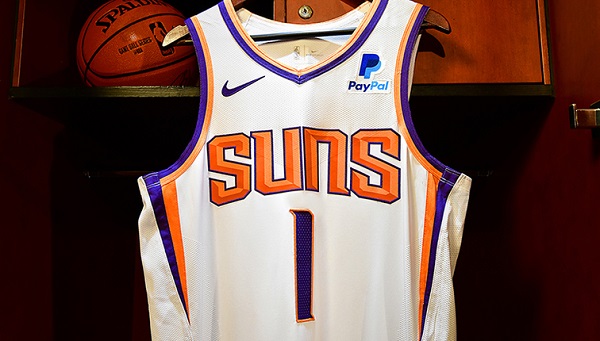 The Phoenix Suns have signed a sponsorship deal with PayPal and will have the logo embroidered on their uniforms this season.

The Suns and @PayPal are working together to become industry game changers.https://t.co/6W9kRW8eGh

“The deal also means a new innovative system for fans trying to make quick and seamless purchases in the arena at Suns games this season as well, as described by ESPN’s Darren Rovell:

As part of the deal, PayPal will be integrated into the Suns’ mobile app, which will allow fans to make one-touch payments to buy everything from merchandise to concession items within Talking Stick Arena, as well as pay for parking. The arena will also have PayPal card readers that enable payments by chip, tap or swipe. Fans will also be able to make purchases using Venmo, the peer-to-peer payment processor that PayPal owns.”

This is a pretty cool sponsorship that actually affects the in-game experience for fans as well.

That leaves only five remaining NBA teams that haven’t agreed to a jersey sponsorship since the NBA started experimenting with them last season: Houston Rockets, Oklahoma City Thunder, Chicago Bulls, Washington Wizards and the Indiana Pacers.