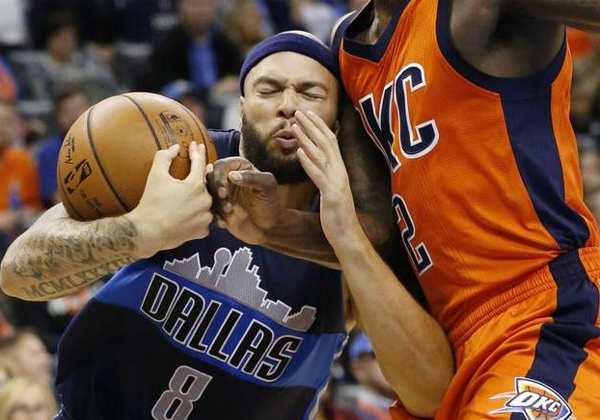 It’s been a rough couple of seasons for now 31 year old point guard Deron Williams, who is now playing in his first season for the Dallas Mavericks.

Once considered among the Top 5 floor generals in the game just a few short seasons ago, as some touted him as on a level even with Chris Paul, “D-Will” has struggled to live up to that lofty hype following taking major money to be the franchise player for the Nets as they moved across the river to Brooklyn in 2013.

Williams made 3 straight NBA All Star appearances from 2010 to 2012, averaging 20 points and 10 assists per game, playing for both Utah and New Jersey/Brooklyn. But over the last 3 seasons, Deron’s numbers have slipped as the team failed to reach their lofty expectations, putting up just 13 points and 6.6 dimes per contest last season, prompting the team to buy out the former Lottery pick this offseason.

Following losing Monta Ellis in free agency, the Dallas Mavericks swooped in and nabbed Williams to be their starting floor general for the 2015-2016 season, one where Dallas was expected to struggle to compete for the 8th seed in the Western Conference.

To everyone’s surprise, the Mavericks have gotten out to an impressive 9-5 start and in 3rd place out West, in part because of the veteran presence of Williams and the ageless Dirk Nowitzki(18 ppg).

Over the weekend, Dallas lost to the OKC Thunder 117-114 as Russell Westbrook again went off for 31 points and 11 assists, but towards the end of the 2nd quarter Deron Williams decided to turn back the clock and blew past Westbrook for a 1 handed slam that shocked everyone, especially Russell, as he stood and stared at the 31 year old point guard for a few moments in disbelief. It was Williams’ first in game dunk since the 2013-2014 season……