Anou Enright July 16, 2015 Interviews No Comments on Listen: We Ask Draymond Green Which Players in the League He Dislikes 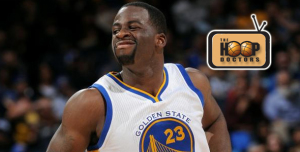 It’s mid-July, so that must mean it’s time for Gatorade’s Athlete of the Year Program to take center stage. Each year, Gatorade honors the nation’s top high-school scholar-athletes and it’s an event The Hoop Doctors have had the pleasure of covering for a few years now.

Listen to THD’s Kevin Burke chat with NBA Champion Draymond Green of the Golden State Warriors about his big win, which players he dislikes in the league, and the Gatorade event….

The annual award presentation goes down in Los Angeles and there’s always a host of professional athletes one hand. Draymond Green happened to be in the building and also participated in the first annual “Gatorade Play it Forward Performance Clinic,” which is an event geared towards community service and giving back by coaching area youth. We were able to get his take on Gatorade, the Finals, his contract extension and if there’s anyone in the NBA that he just generally doesn’t care for.