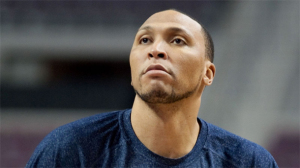 From the moment we were introduced to Shawn Marion’s funky shot release, we knew he had to be talented to make it as far as he had with a shot like that. Shawn was drafted in 1999 and has enjoyed a very fruitful career. But this may be the end of the line for Marion, as he has announced this will be his last season.

The 36-year old is finding it difficult to not see his 8-month old son grow up everyday. Can’t blame him for that. Much respect for making this decision.

When the Suns drafted Marion in 1999, Marion set a goal to play 15 seasons. The 36-year-old believes he could play another three seasons but being away from his first child, 8-month-old Shawn, has convinced him to retire after this season with the Cavaliers.

“I wanted to go out on my terms,” Marion said. “The biggest thing is having a son. I got attached to him. Seeing him periodically is hard. Watching him grow up on pictures and videos is hard.”