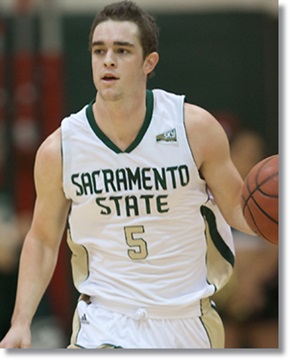 It’s not very often that Big Sky Conference highlights make the top plays of the weekend when it comes to college basketball but Dylan Garrity of Sacramento State may have just hit the most amazing buzzer beaters of the year to this point.

With conference leader Weber State, best known for being the Alma Mater of 2013 NBA Rookie of the Year Damian Lillard, tying the game at 75 in overtime thanks to a clutch 3 point shot by junior Mikh McKinney, the Sacramento State Hornets’ junior guard Dylan Garrity had only 7.7 seconds to do something magical and help to keep his squad from losing their 12th game of the season.

Garrity corralled the inbounds pass and made it to Weber State’s 3 point line before firing off a last chance, 75 foot hail mary heave with the game on the line.

How many times have we seen this before where the ball clangs off the back of the rim and the crowd sighs in disappointment?

Well this isn’t one of those moments as Garrity sinks arguably the buzzer beating shot of the year to beat the heavily favored Weber State Wildcats……….